One of the most useful skills I’ve ever picked up was from a Mental Health First Aid course I took as part of a mandatory job training. I had no idea that two years later the person I would be using my training the most on would be myself. I approach Mental Health First Aid the same way I would approach regular First Aid. I would be able to treat a sprained ankle from home, for example, but I would want a professional to treat a broken ankle. Currently my gender dysphoria is like a sprained ankle; hurts like the dickens, but is still manageable.

The problem is, just like a sprain, one wrong twist and I’m left hobbling along gingerly for days. The most recent incident was triggered by mostly harmless comments from my coworkers. The first being, “Why do have to be so aggressive?/I don’t like your attitude”. Alone those comments are hurtful, but not enough to cause days of emotional grief. The second catalyst was another coworker and I were talking about meditation and how he’s using meditation to have “out of body experiences”. It just hit me out of nowhere that “out of body experience” is exactly how I describe looking at myself in the mirror. The idea that someone was purposely trying to do what I feel on a daily basis was the “wrong twist” that sent me on the latest spiral.

The hardest thing for me about a bad dysphoria incident is the spiraling thoughts and the anxiety that comes with it. I’ll usually alternate between being sad and feeling like a freak to being pissed off at the world. The circling thoughts that I have during that time are definitely not healthy and I have to remind myself to take action to stop spiraling downward. I also get really bad headaches whenever I get mad or upset so I take my mental health very seriously.

First Aid courses love their acronyms. For a sprained ankle the acronym is RICE. Rest, Ice, Compression, Elevation. Keeping the the sprain metaphor I also ‘RICE’ed when I realized how emotionally distressed I was this past week:

REST: Resting was probably the most important step. Since I was at work at the time of the trigger incident, I did calming techniques to tie me over until I could go home and go to bed. I spent a lot of time reading and keeping to myself until I could relax and I made sure to get plenty of sleep. It took work because I was still anxious, but I made resting my priority.
Informed: Secondly I look at my options. What resources to I have available? Who can I reach out to? Most of the job places I’ve worked at have mental health resources if I needed it. Did I need to call in an take a mental health day. Would transitioning physically or socially help? What are my options for that? (I’ll touch more on transitioning a little later.)
Compression: This was actually the first week that I felt like I needed to wear my binder in public. I usually work 9 hour shifts so wearing a binder at work isn’t comfortable. Instead I wore my binder to my night class and it felt amazing. The binder I have is super comfortable (for a few hours at least before I feel like I need to take it off). It’s weird to think that I felt like I could breath easier wearing it.
Engaging with Community: Since I knew I was still feeling bad I talked to some folks in an agender chat room. I love to vent. If I can talk about my problem to somebody and get it off my chest then I feel a million times better. It’s amazing to have that interaction with people who get it, have been there, and can remind me that it does get better. Having a support network in place is one of the best things you can do for your mental/emotional health.

After a few days of taking care of myself I’m feeling much better, but the truth of the matter is my gender dysphoria is probably never going to go away. When I look in the mirror I’ll still feel that “not my body”or “out of body” experience. I don’t think a physical transition would work for me. I’m agender; there isn’t gender to for me to transition into. If there was a way in my culture to look truly androgynous that wasn’t colored by the masculine/feminine, then maybe I would do that, but I don’t want to be seen as a man or a manly girl, tomboy or butch. I don’t want to be seen a girl, feminine, or womanly. I want to be seen as agender. 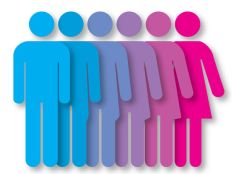 Maybe if there were nonbinary folks in mainstream media I would feel more comfortable in my own skin. It would be nice to have role models. It would be nice to have something to point to so I could tell my coworkers, “See? That’s just like me.” For now I really have no idea what I can do to get rid of my dysphoria for good. It’s a problem, but for the moment it’s a manageable one. That’s just going to have to be good enough even if, occasionally, it really hurts.